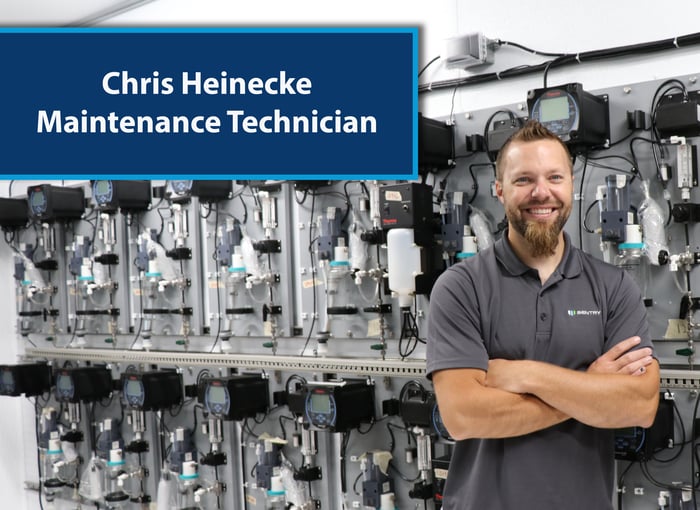 Sixteen years ago, Chris Heinecke was doing what he loved as a mechanic at an auto shop. He enjoyed the work, but wasn’t sure if it was the right career path for him. When a friend joined Sentry Equipment and recruited him to join the company as an assembler in 2001, he jumped at the chance to take on a bigger challenge.

He's been a class A electromechanical assembler, working with electric parts and mechanicals for Sentry’s Steam and Water Analysis System (SWAS) panels.

Heinecke likes the big-picture aspect of the job and the methodical way a SWAS comes together, especially when he’s configuring a custom panel. “With SWAS systems, you’re working on the job start to finish, and every day is different,” he says, “The variety of work is my favorite part.” 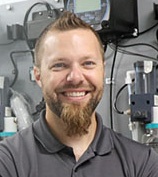 Three things he’d take on a deserted island: “My cell phone, food and water, and my dog (a 10-year-old American bulldog named Diesel)."

Did he know how to pronounce Oconomowoc before working at Sentry Equipment? “I’m an Oconomowoc native, yes.”

A Team Effort in Every Department

Midway through his career at Sentry, Heinecke spent five years in the aftermarket products and service department as a supervisor. “Sentry gave me the opportunity to become a supervisor, and they were willing to train me on the job. That’s something I’m proud of.”

He recently rejoined the assembly team because he missed the work – and the people. “Since everything our department works on in isn’t shown on a print, my coworkers are more than willing to open their book of secrets and show you if there’s an easier way to do something,” he says. “I also loved that the company was willing to let me transition back to the assembly team, and they welcomed me back with open arms.”

He says this is typical of the Sentry work culture, where every individual is working toward a common goal. “It’s always a team effort,” he says. “As an employee-owner, you take pride in your work. You feel comfortable so that if you see a problem, you can say something. You’re watching out for the best interests of Sentry as a whole.”

Learning On - and Off - the Job

Heinecke was always a mechanically-inclined kid, and his dream is to someday own his own custom auto shop. In 2010, not only did he fulfill the role of general contracting the build of his Johnson Creek home, he also performed a good portion of the work while working full-time at Sentry. He even built a shop in his garage, complete with a car hoist to work on cars in his free time.

His work ethic is something he’s learned from his dad Dave Heinecke, a rough and finish carpenter who still lives in Oconomowoc. “He proved if you worked hard, you could play hard,” Heinecke says. “I admired his dedication to raising a family and always being there for us.” For Heinecke, playing hard includes high-adrenaline sports such as long-track snowmobiling in the mountains of Colorado, Utah and Wyoming and riding a 2009 Harley Street Glide he custom built himself.

But one of his most important lessons he learned from his time at Sentry. “Be willing to listen to understand – not just to respond,” he says. “When you take the time to listen and understand what someone else is saying, rather than formulating a response before they’re done speaking, this not only helps you fully understand the situation, it also usually helps you formulate a plan of attack that you both can usually agree on. That skill has definitely bettered my career.”

He says working at Sentry has opened his eyes to what is possible in a career and a company. “Here, your advancements aren’t limited. They’re limitless if you’re willing to work hard and show dedication.”

Update: As of August 2018, Chris has taken on the new role of Maintenance Technician. He still enjoys the atypical days and the new challenges this position brings to his skill-set.

Employee-Owner Profiles is a regular feature that highlights members of our team. As an employee-owned company, Sentry Equipment believes that employee ownership makes a difference. Our employee-owners are dedicated to hard work, positive results and continual improvement and innovation to provide our customers the highest quality products and services.